CertExams.com Juniper Netsim is another widely known product that provides a virtual networking environment for practice using Juniper routers and switches.  A comparison of Certexams.comm Juniper Netsim to that of GNS is given below:

Note 1: The Certexams Netsim doesn’t require Junos software as in the case of GNS. It is a stand-alone software and uses its own routing engine simulator. It may be noted that officially, one can’t use JUNOS software outside the device as intended by Juniper Systems.

Note 3: All available commands are listed on this page. Just check it out.
Juniper Junos Supported commands

The Juniper Netsim consists of the following modules: 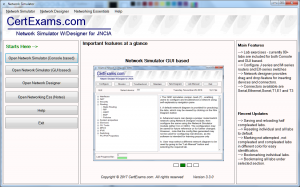 3. Network Simulator – GUI based: Configuring the network is similar to that of console-based, but you will have GUI (Graphical User Interface) instead of typing the commands. This way, you don’t need to remember the syntax, etc. 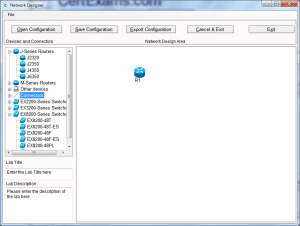 As can be seen in the diagram, it consists of two panes. One in the left provides all the devices such as routers, switches, and cables that are available for use. All you need to do is drag and drop the devices as per your requirement and then use appropriate cables to connect those devices. It is recommended that you plan the network diagram beforehand. The design area is given in the right pane of the diagram. The device information is available in the lower pane upon selecting the device (not shown in the diagram here).

5. Network Essentials Manual: This provides networking basics such as IP addressing, binary to hex conversion, TPC/IP troubleshooting commands, Identifying various connector and cable types, etc. If you are a beginner or intend to review the basics, this manual would be of immense help.

6. Labs Manual: This manual is called from the Simulator window. Once the simulator window is initiated (eight console-based or GUI based), one can open the labs manual and choose any lab tha 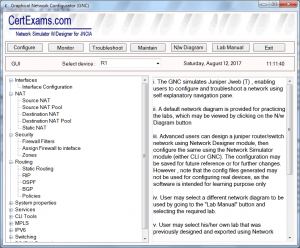 t you want to load. After loading the lab into the simulator window, you can work on configuring the same and troubleshooting. The lab manual provides step-by-step instructions on how to configure and troubleshoot the network. Several topics have been covered in the labs so that one need not worry about designing one’s own labs. The topics covered include labs on router fundamentals, static routing, policies configuration, RIP, OSPF configurations, dynamic routing labs, labs on firewall and NAT configurations, ipv4 and ipv6 configurations, DHCP, VLAN,  VTP, and switch configuration labs. You may view the entire range of available labs here:http://routersimulator.certexams.com/juniper-sim/labs/index.html

The networking simulator is most useful for beginners who want to have hands-on experience in a virtual networking environment without having to buy the real equipment which typically costs 1000s of dollars and is very time-consuming. Please be cautioned that virtual networking is limited in scope and may not be used in configuring practical networks or troubleshooting the same.

Check out the Juniper netsim and download a free demo to explore further.